KUSM-W > Newsroom > The Wonder of it all: Middle school students visit Simulation Center at KU School of Medicine-Wichita

The Wonder of it all: Middle school students visit Simulation Center at KU School of Medicine-Wichita

A group of middle school students received hands-on experience and more when visiting the Simulation Center at the University of Kansas School of Medicine-Wichita.

The Wonder students used words like "incredible," "beautiful" and "blissful" to describe taking part in a simulated birth, while practicing CPR on manikins made some feel like they were ready to save a life if required.

"I took away from the experience that giving birth isn't a gross or disturbing thing, but it is a beautiful thing," Kenzy Masterson wrote a few days after the event.

Masterson was one of 10 seventh- and eighth-graders from Wonder who spent a busy hour in the center. In one room, they watched and helped a high-tech manikin named Victoria give birth. In another, they performed CPR on four other manikins. And in a third, they changed diapers and learned to swaddle life-size baby manikins. 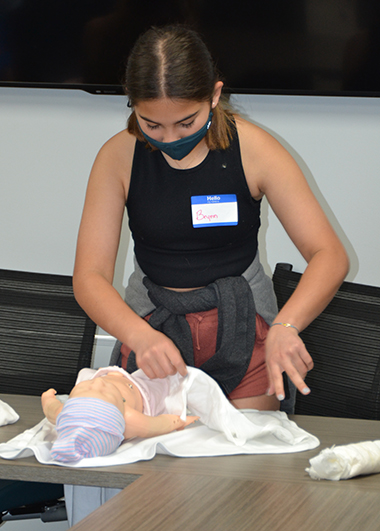 Wonder is a private school that opened on the Wichita State University campus in 2018. The school focuses on experiential or applied learning and is organized into multi-age "studios" rather than traditional classrooms restricted to students in one grade level. The curriculum is built around four- to six-week learning projects, and instructors are called guides.

The students visited KU School of Medicine-Wichita as part of a six-week project concerned with "embracing life and facing death," said Bailey Bryand, a Wonder guide. They'd already visited a cemetery and have plans to interview some senior citizens, Bryand said.

"The girls were really excited to come today," Bryand said of his class, in which girls outnumbered boys 7 to 3. "The boys were a little nervous and standoffish."

However, Bryand noted, the boys seemed to be just as engaged as the girls once they got there. When Mary Koehn, Ph.D., APRN, CHSE, associate professor at KU School of Medicine-Wichita, asked who among them wanted to help Victoria give birth, eighth-grader Cohen Collinsworth quickly volunteered. Cohen donned surgical gloves as Koehn explained the significance of vital signs such as heart rate and oxygen levels that were displayed for Victoria and her unborn child. Following Koehn's direction, Cohen used two fingers to check the manikin's cervical dilation and then find the top of the baby's head. The two supported the baby's head as it emerged, doing the same with the shoulders and body as they turned to pass through the pelvis.

"Alright, your first baby," Koehn said. "Now you've got to give it a name."

"We've never had a Ted before," Koehn said. "Strong name."

Koehn then showed the students a model of a placenta and umbilical cord, explaining how the latter is clamped and severed following birth.
Masterson was just as eager to deliver Victoria's baby when Koehn asked for another volunteer.

"It was a good learning experience, especially since I want to have kids of my own." She was surprised by "how much you pulled and helped the woman give birth."

Students named the other two babies delivered that day Mya and Taytum. One student asked Koehn to explain what an epidural is and whether it's painful. When Koehn mentioned that Victoria can be programmed to communicate, one student asked, "Will she be screaming?" Koehn said that all births aren't that painful.

Several students thought the lesson in CPR might be the most valuable takeaway of their visit. Garry Tolle, Simulation Center teaching associate, instructed them how to recognize when someone is in cardiac arrest and how to use their hands in a steady pumping motion on the person's chest to keep blood flowing.

As the students knelt over the manikins, Tolle encouraged them - "Doing good, just a little bit faster" - and said one method of maintaining the correct pace is to follow the rhythm of a well-known song like "Staying Alive." Tolle, a former paramedic, told them that saving a life "is the greatest feeling in the world."

Wonder student Paige Umbehr said she left feeling like she could use CPR "while babysitting, when I am a parent, or when I am out in public and someone needs my help."

One area where the girls seemed to have an advantage was in the dressing and swaddling of the baby manikins, perhaps because at least two are already experienced babysitters. One boy got kidded for putting pants on his infant's head.

Jeanne Raitt, Simulation Center program coordinator, said swaddling babies may not be a medical procedure, but it is something that medical students are taught.

The primary purpose of the Simulation Center is to help medical students develop practical skills in a highly realistic, no-risk environment. Sessions on everything from performing a spinal tap to responding to heart attacks and intubating patients take place each month. The center has hosted students from Park Elementary School in the past although the next visit has been on hold because of the coronavirus pandemic.

"We were super excited we could have (guests) again," said Erin Doyle, Simulation Center program director.

One of those Wonder students might even return on a regular basis one of these days. Cohen Collinsworth, whose mother graduated from KU School of Medicine-Wichita in 2001, said the visit left him thinking medicine "is definitely something I might be interested in."

Collinsworth said he may shadow his mother for a time in the future as part of another Wonder assignment.

"This is useful information because before I was not sure, but now I know this is something I am interested in," said Collinsworth.

"I learned that birth is something much more complicated than you might think. It showed me that the beginning of your life is quite an interesting and happy time. It made me grateful to be alive." - Frank Ritchie

"Watching the simulator made me more at ease with how childbirth works. It was truly incredible to see how it works and what is happening on the inside of the mother's womb during childbirth." - Emelyn Greenman

"My favorite part about this experience was learning about the start of human life. I really enjoyed this experience and I hope I can learn more about it in the future." - Parker Patterson

"My favorite part was getting to do CPR. I also enjoyed learning how to swaddle the babies and change their clothes." - Paige Goetz

"Something I took away from this experience was that birth is actually a lot different than I had expected. My favorite part of this experience was doing the CPR station because I feel like I can now save a life with knowing how to do CPR." - Emry Kinkaid

"The biggest piece I took away from the trip was from the birthing station; it opened my eyes to a new meaning, something bigger. I felt I had experienced a situation that meant something more than I had anticipated. Although unexpected, when I witnessed the baby come out, it was almost blissful. I felt I had received an emotional lesson." - Brynn Bachura

"I learned that the medical field is something that I am definitely interested in; this is useful information because before I was not sure, but now I know this is something I am interested in. My favorite part was delivering the baby because I got to learn the most from it and even though it might not be useful later on in life, I am still glad I learned it. What surprised me the most was that the placenta comes out after the baby. I didn't know that and to be honest I am not sure I wanted to." - Cohen Collinsworth

"I took away from the experience that giving birth isn't a gross or disturbing thing, but it is a beautiful thing. You get to watch life enter the world and that is something that we take for granted. My favorite part was being able to help deliver the baby. It was something I thought I would never do but once I did it, I was very happy that I was open-minded to the idea of giving birth. I was surprised with how easy it is to feel how dilated the woman was and how much you could feel. I was also shocked by how much you pulled and helped the woman give birth." - Kenzy Masterson

"From the experience, I took away a new meaning of life. I was going into this hoping for that and I did get my wish. I always saw giving birth to a baby as bringing a new stranger into the world, but when I came out of this experience, I realized how much more amazing life is. There is a whole new being on this earth that is making someone happy, whether that is making the parents filled with joy or something else. The process of birth may sound gross and scary, which it is, but when you look past all of that, it is actually truly amazing." - Paige Umbehr

"I liked the CPR; I did enjoy gaining a new meaning of life while watching Victoria giving birth, but I thought it was cool to know what to do in an emergency situation. CPR is an important life skill and I can use it while babysitting, when I am a parent, or when I am out in public and someone needs my help." - Paige Umbehr

Click on the image below to see a photo album of Wonder students' visit to the Simulation Center. 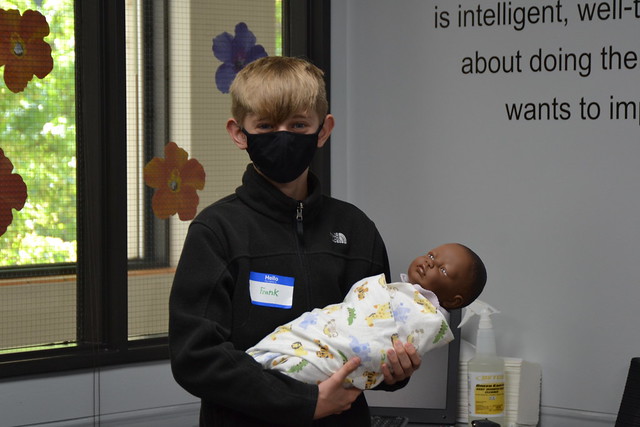