It's been 40 years since the AIDS virus was identified in a monthly CDC report, and while it no longer remains the lethal disease it once was - thanks to incredible leaps in detection and treatment - too many people are still testing positive for the virus that can lead to AIDS, according to the state's expert on the virus.

Donna Sweet, M.D., a professor of internal medicine at KU School of Medicine-Wichita and director of the KU Wichita Internal Medicine Midtown Clinic and Ryan White programs, was one of the first doctors in Kansas to provide care to HIV and AIDS patients, starting in 1983 when a Wichita native diagnosed with AIDS returned home from Philadelphia and asked who the local AIDS doctor was. Before then, Sweet had been reading up on the disease out of what she calls "academic purposes."

She remains the state's top physician who treats HIV and AIDS patients, has participated in several clinical trials that have helped advance treatment, and has helped educate physicians and other health care professionals in the state, nationally and internationally about the virus and AIDS. (HIV and AIDS are different diagnoses, with HIV referring to the virus and AIDS being a condition that can result from the virus.) 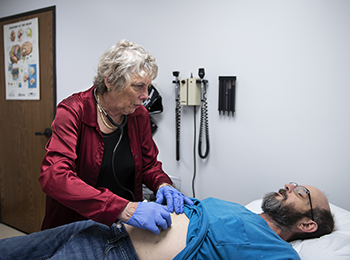 "There are probably 30,000 to 40,000 new infections in this country still every year. And it's totally preventable," said Sweet, referring to one of the medical marvels that have emerged in recent years: pre- and post-exposure preventive drugs (known as prophylaxes) to reduce the risk of acquiring HIV.

In Sweet's practice, which also includes outreach clinics in Salina, Pittsburg and Garden City, between 45 to 60 new patients test positive annually for the virus, according to Mike Madecky, the practice's HIV program coordinator. In May alone, nine new cases were identified.

Sweet currently cares for about 1,300 HIV and AIDS patients through her four clinics.

As the program director for Midwest AIDS Training + Education Center for Kansas and Nebraska, Susan Tusher works with Sweet to provide HIV and AIDS care training to health care professionals. Tusher, who started working with HIV and AIDS patients as a case manager for another agency 33 years ago, agrees with Sweet that while new drugs have worked wonders in helping control the disease and better testing is available, HIV "is still spreading."

According to hiv.gov, a website run by the U.S. Department of Health and Human Services, approximately 1.2 million people in the U.S. ages 13 and older have HIV, and about 13% of them don't know it and need testing.

"Once the death tolls started going down - it's not the death sentence it once was - people mistook that the better meds were a cure," Tusher said. "When I started (working in the field) patients were living maybe six months to two years. I was going to funerals weekly, it seemed."

Madecky agrees. "Unfortunately, I think HIV is yesterday's news, not like when people were dying within six months and there were so many funerals. Now people are living normal lifespans but that doesn't mean it doesn't deserve attention."

In the 2000s, death rates starting declining and stabilizing. In 2019, according to hiv.gov, there were more than 15,750 deaths among those diagnosed with HIV, while those deaths could have been due to other causes.

For those who test positive for HIV and even those who develop AIDS, survival rates have also made a dramatic leap since the epidemic was first identified, Sweet said.

Now, HIV patients are living long enough that Sweet sees them for conditions most often associated with aging, not because of the virus.

Advances in medicine have made a tremendous difference in the survival rates, Sweet said. In 1987, the FDA approved the first medication to treat AIDS, the antiretroviral drug AZT, and then protease inhibitors became available in the mid-1990s. Before those drugs, patients often were prescribed handfuls of daily medications, some of which caused toxic, debilitating side effects.

Sweet's clinic was recently involved in testing a new protocol that could become "the hot news for treatment" - a once-a-month intramuscular injectable drug, she said. That drug just received FDA approval.

In 2019, the U.S. announced its Ending the HIV Epidemic plan with the goal of achieving a 75% reduction in new HIV infections by 2025 and at least a 90% reduction by 2030.
In information about the plan, found on hiv.gov, it cites a "real risk of an HIV resurgence" for various reasons, including HIV-related stigma; homophobia and transphobia; lack of access to HIV prevention, testing and treatment; and lack of awareness that the virus is still a threat.

Both Sweet and Tusher said those factors indeed do exist today.

"I still have patients today who will do everything in their power to keep it from their families because of what people will think," Sweet said.

Celebrated actor Billy Porter said he had kept his HIV diagnosis, made 14 years ago, secret until recently because he worried about his mother having to deal with the reactions of others.

Inequities in care for the uninsured and Black and Latinx communities continue, as well, Sweet and Tusher said. During the COVID-19 pandemic, those disparities were also cited for higher rates of infection and deaths among those communities.

To help identify and reduce infection rates, everyone between the ages of 15 to 65 should get tested at least once, Sweet said. (Visit gettested.cdc.gov or call 800-232-4636 for testing sites.) The CDC's recommendations are similar, with an age span of 13 to 64. People at higher risk should get tested more often. Sweet said there are misconceptions still today about how the virus spreads, which is only through certain body fluids.

Rapid fingerstick tests can provide immediate results for anyone concerned about having been infected, Sweet said.

There also needs to be better awareness of the U=U (Undetectable=Untransmittable) concept, said Sweet, Tusher and Madecky.