JayDoc, the retired mascot of the University of Kansas School of Medicine, is now on display in the George J. Farha Medical Library.

KU Wichita's newest resident is a figure with a colorful history since the 1950s: a 6-foot-tall version of JayDoc, retired mascot of the University of Kansas School of Medicine.

Installed this year in the George J. Farha Medical Library at KU School of Medicine-Wichita, the big-beaked bird with stethoscope and head mirror "has created quite a stir," said Heather van Buuren, director of Academic & Student Affairs.

The JayDoc was created by dressing a mannequin in a costume that had been in storage.

"It's been down there quite a while," van Buuren said. "We've asked the archivist at KU, there's just no record of who made it or when it was made. But we know who designed it."

That would be Dr. Gene Williams, a multitalented artist who graduated from KU medical school in 1954 and who created the character that the costume was based on.

But the character's roots go back quite a bit earlier - to before the Civil War, when the term "Jayhawker" was applied to Kansans who opposed slavery, sometimes in violent encounters with pro-slavery Missourians. There's no such bird as a Jayhawk; the name combines the names of two other birds - the pugnacious blue jay and stealthy sparrow hawk.

According to a 1980 article in a KU alumni publication, the name was used at the school at least as early as 1886 and given to its first football team when it began playing four years later. In 1910, a student artist "produced a big-billed bird with long legs that was used in the student paper and other publications," the article stated. By 1923, the Jayhawk had been transformed into a "quaint duck-like image" that "had wide acceptance by students and alumni."

Williams, who was from El Dorado, transformed the Jayhawk further while attending KU as an undergraduate in the 1940s, before and after his service as a combat infantryman during World War II. Williams "drew a perky, contemptuous bird, with an appearance of becoming tough if bothered."

He wasn't done, either. After entering KU medical school in 1950, Williams started drawing the Jayhawk with stethoscope and doctor's bag; one version appeared on the cover of the student yearbook in 1954. Williams also drew cartoons of students and faculty that hung in offices and corridors throughout the Medical Center complex.

After completing his residency in Kansas City, Williams practiced in Phoenix, specializing in diseases of the ear, nose and throat. He returned to El Dorado in 1970 following a heart attack. There Williams explored numerous artistic mediums, from oils and wood carving to acrylics and blacksmithing, while continuing to practice medicine. He also fulfilled several requests for new medically themed Jayhawks, including a middle-aged bird for the Division of Health Care Outreach & Continuing Education and others portraying Jayhawk as a nurse, female physician and EMT.

Williams died in a hot air balloon accident near El Dorado in 1979; at the time he'd been commissioned to create a bronze Jayhawk, M.D., for the lobby of the new KU hospital.

The alumni association article refers to Williams' character as "Jayhawk, M.D." It's not known when the "JayDoc" nickname was coined.

Alex Welborn, head archivist in the KU Department of History & Philosophy of Medicine, said it's also unclear when people first started dressing up as JayDoc. The earliest photographs he's seen date from the 1970s or ‘80s. "That was either at a graduation ceremony or some other special event," he said.

The early costumes appear to have been handmade. Later versions were made by the same sporting goods company that made the Jayhawk mascot for KU athletic teams.

Welborn said he's "not aware that anybody has dressed up (as JayDoc) for a number of years," noting that the school's alumni association owns the copyright. Although a likeness of JayDoc once adorned the Wichita campus' main building, it has been replaced by the traditional Jayhawk mascot.

One of the last people in Wichita to wear the costume was John Maksimowicz, a member of the IT department. Maksimowicz, who started work there in 1997, thinks it took place in the late '90s or 2000s, possibly at a health fair or as part of a program put on for a middle school.

"It was on a volunteer basis," Maksimowicz recalled. "They just sort of put out a call."

According to Maksimowicz, the costume wasn't built for comfort or speed.

"It's got a big head," he said. "The shoes are huge and clumsy. It has a foam breast - I guess to make you look bigger. It can get very warm."

Maksimowicz said the costume's beak "came right down over where your visibility is. The visibility is very lacking. You almost needed a handler of some sort to guide you."

Asked if he was given any instructions when putting it on, Maksimowicz said: "JayDoc was generally supposed to stay quiet. You waved, shook hands. That kind of thing."

The costume also was worn in the 2009 Riverfest parade when the theme was Get Your Groove On, reminiscent of the Woodstock era.

"I've been trying to get the costume stuffed and put somewhere for years," van Burren said.

But when Reuben Saunders, owner of a Wichita art gallery that bears his name, was asked to do the job, he decided a soft mannequin would work better. His staff built a frame to hold the costume's head and a base to stand everything on. There were actually parts of a couple different JayDoc costumes in the box. Saunders had them cleaned, used the best parts he could find and repaired some others.

"We didn't try to change anything. We just tried to put it back together the way it was, cleaner and neater."

The stethoscope is made of surgical tubing and a funnel. The head mirror or reflector is a compact disc.

Saunders, who has framed items for the school in the past, admitted the project was an unusual one.

"When you have a client and they call up and say can you do something, you try to do that. We may or may not be known as the ‘JayDoc restoration company.'"

Library staff appreciates the effort and enjoys the new fixture.

Above, right: Dr. Gene Williams is pictured above his drawing of the JayDoc, circa 1954.

View additionals photos of the historical JayDoc mascot in the Flickr photo album below. 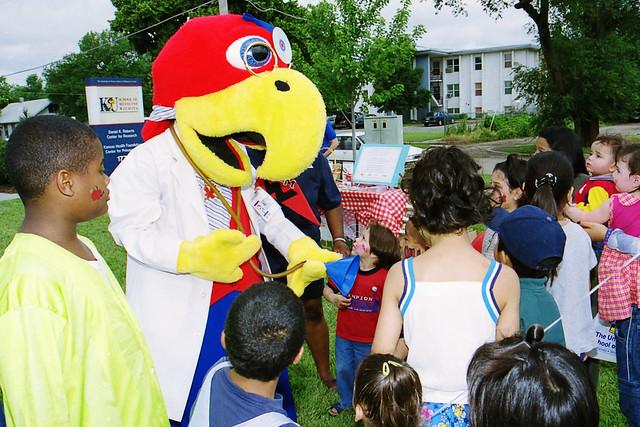